An overview of talks, both individual and at conferences, given by members of the Quantified Self research group.

“Command and Control 2.0: The Quantified Self and Biomedical Posthumanism”

This is a revised and updated version of the talk given at the 2015 SLSA EU conference in Stockholm. 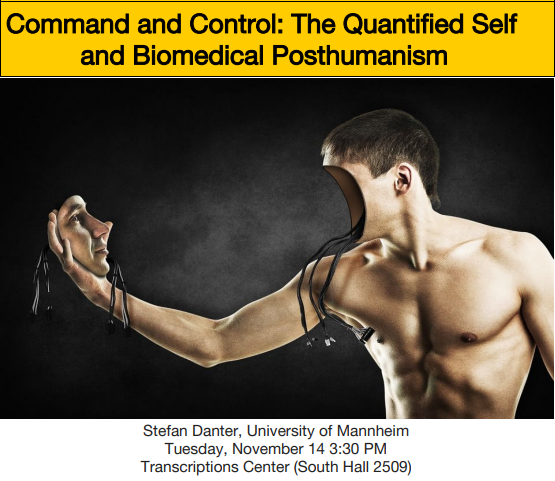 Advances in computer sciences and technology that have jumpstarted the rise of smart devices and their inclusion into an ever increasing number of everyday contexts are starting to change the way human subjects see and think about themselves.

In this talk, Stefan Danter will look at the way contemporary technology has cemented the hegemony of the numerical, and how the concept of the “Quantified Self” could be used to not only optimize, but also control individuals. What exactly does it mean if knowledge is increasingly understood as synonymous with quantification and ever increasing data sets? And what implications does this “quantification culture” have for contemporary concepts of subjectivity, especially when considering scenarios in which participation in said culture is no longer voluntary? It is within this context that literature can offer valuable insight by incorporating quantitative ideas and critically reflecting on them.

Drawing on Eric Garcia’s Repossession Mombo and Gary Shteyngart’s Super Sad True Love Story, the talk aims to analyze literary reflections of the growing “quantification culture” within biotechnology and medicine and highlight some of its pitfalls and problems.  Both novels present futuristic scenarios in which biotechnology and medicine have ushered in a quite posthuman reality, where matters of life and death are determined by quantified data and individual agency is signigicantly reduced.

“Networks and Numbers: New Models for the Humanities?” 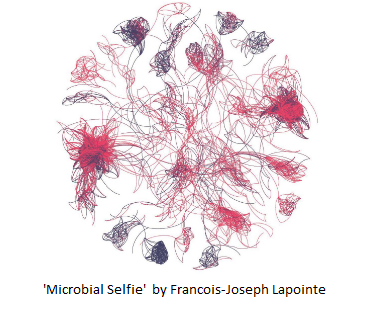 With the rise of digital technology, new epistemological models have entered scholary debates about humanities. In her talk, Regina Schober will look at the concept of ‘network’ and ‘quantification’ as transdisciplinary phenomena that have increasingly been explored in the humanities. As a preferred metaphor and figure of thought in our current information age, the network serves to describe the complex, recursive, and multilateral structures. At the same time, Big Data has brought forth a paradigm shift from qualitative to quantitative (self-)description. What does it mean if (US American) literature and culture not only address digital practices but also incorporate them into their narrative structure? How do these concepts callenge traditional assumptions concerning knowledge, subjectivity, and agency? And finally, what does it mean to adopt ‘network’ and ‘numbers’ as models for the humanities? Ulfried Reichardt, “Control, the Quantified Self-Movement, and Contemporary Fiction: Zero and the Circle”

In my paper I will investigate the contours, the history, the different forms and functions as well as the blatant dangers of the Quantified Self-Movement. The term refers to forms of self-tracking which use digital devices. They involve self-observation and aim for self-improvement, implying a strong version of self-disciplining. Today’s forms of self-tracking have to be understood within the context of neoliberalism, of the monopolization of internet corporations as well as the exponentially increasing spectrum of options of biological enhancement. In particular the possibilities of the aggregation of (big) personal data can be regarded as a threat to the individual person’s sovereignty with regard to her or his data, even while the Quantified Self-Movement promises customized care and individualized environments. I will analyze recent forms of self-monitoring as versions of “hyperindividualization” which at the same time imply a large degree of externalization of the self. Control is effective in self-control as well as in the surveillance through the owners of Big Data who now have the means to control users’ lives. Control and being controlled here intersect in highly problematic ways. I will contextualize self-tracking by briefly tracing its history in America from Puritanism to the present, reflect on the effects of media and media-change, and will also discuss quantification as one of the crucial as well as problematic scientific “devices” of Western societies. Moreover, by looking at two recent novels I will compare US-American and German attitudes and thus introduce an interculturally comparative element into my analysis.

Stefan Danter, “Command and Control: The Quantified Self and Biomedical Posthumanism” While questions and strategies of control are nothing new in the “era of biopolitics”, recent years have seen a drastic increase in the influence of numbers, data, and statistics. This becomes quite obvious in areas such as medicine, biotechnology, and computer sciences that directly impact human bodies, for example by being able to determine the probability of deadly illnesses or calculate the exact numerical thresholds for a healthy lifestyle. One result is the concept of the Quantified Self, an idea of subjectivity driven by individualism, selfoptimization, and a techno-euphoric belief in progress, self-control, and self-possession. It embraces the promises of quantification and confirms the status of numerical data as a source of true knowledge while usually forgetting the fact that statistics do not necessarily reflect context and that numbe rs also serve to create limitations, deny access, or exert control. It is in this context that literature, with its capability to critically reflect and experiment with future scenarios offers useful insight. Drawing on Eric Garcia’s Repossession Mambo and Gary Shteyngart’s Super Sad True Love Story, this paper aims to analyze literary reflections of the growing “quantification culture” and to show how blindly relying on the promises of quantification might cause a situation in which the individual is less autonomous and less in control than before. Both novels present futuristic scenarios in which biotechnology and medicine have ushered in a quite posthuman reality, where matters of life and death are determined by quantified data and individual agency is significantly reduced.